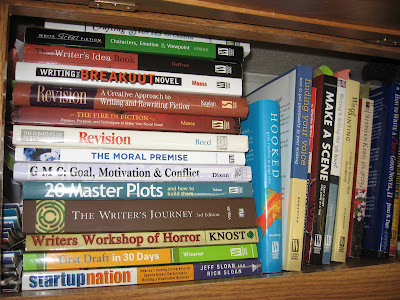 The pic above are books I own on the craft. Of course, I also have some on my Nook:
The Writer's Compass by Nancy Ellen Dodd
Write Great Fiction by James Scott Bell
Story Engineering by Larry Brooks
Story Structure Architect by Victoria Lynn Schmidt
The Anatomy of Story by John Truby
Outlining Your Novel by K. M. Weiland
Screenwriting Tricks for Authors by Alexandra Sokoloff

...and several others. But these are the ones on structure.

Must be many writer's stories lack structure with all the blogs I've read recently seem to be talking about it. Larry Brooks blog is about his seven competencies you need to write, although it seems structure is a big part of it. In the next few weeks he's going to break down Hunger Games for us. K. M. Weiland has just finished a series on structure on her blog Wordplay. It's a great series, I recommend reading it.
Some instruct us referring to the three acts, others call it the beginning, middle and end. Some even divide the middle into two parts. Probably because the middle is the longest and everyone seems to agree on that. Then there's terminology, hook, inciting incident, point of no return, rising action, mid-point, climax, and denouement. To name a few. Some refer to the hook as the inciting incident. The inciting incident could be the point of no return, which means you need a hook at the beginning to keep readers reading. So the hook and the inciting incident must be separate and not the same. Its a wonder most of us would like to throw it all out the window.
John Truby talks about 22 steps. He thinks the three act structure is too simplistic, albeit easy to understand. Three acts, in his opinion, will make your story boring and have no depth.
I'm not saying not to educate oneself by reading any of these fine specimens. Just keep an open mind. Try not to get too hung up on terminology. And when you're ready to dive into that tray of cupcakes, write. Because the only way any of us is going to learn is to write. So here's a link to Joe Bunting at the Write Practice because that's what his blog is all about.

MG and YA Books I Liked